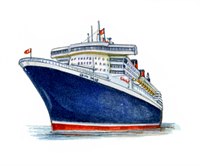 Opened in 1966 by Her Majesty The Queen to augment and later replace the Ocean Terminal, this was the home berth of Cunard's World famous QE2.

The QE2 was completed by the John Brown shipyard on the Clyde in 1969. Small by present day standards, she was 963 ft. long, 105 ft. wide and had a draught of 32.5 ft. and a gross tonnage of 65,863. She was withdrawn from service in 2008 and sold to interests in Dubai for conversion into a conference venue although the project has not progressed.

Recently refurbished, the QE2 Terminal remains one of the busiest cruise terminals in the Port of Southampton.