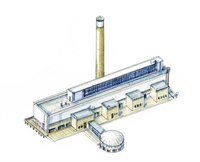 Built in the 1960's and commissioned in 1971 for the CEGB, Fawley was an oil powered station run by RWE npower.

It had 4 x 500 MW generating units with a combined output of 2,000 MW. Two units were closed in 1995 and the station was finally closed on 31 March 2013. There were also two gas turbines for emergency use. Heavy oil was supplied by pipeline from the adjacent Fawley oil refinery. It was filtered, heated to 130 degrees and pressurised to 80 bar before being fed into the boilers to produce steam to drive a turbine that powered an associated generator.

The chimney is 198m tall and the sea water cooling pumps (at the time the UK's largest) had a flow of 210,000 gallons per minute. The station has many architectural features, including a striking glass-panelled boiler house and futuristic, circular control building.

It was connected to the National Grid with circuits going to Nursling and a tunnel under Southampton Water to Chilling then to Lovedean with a local substation at Botley Wood.

A dock was included in the construction, to allow for the delivery of oil by sea; however after one ship-delivery (essentially a trial) this facility remained disused.