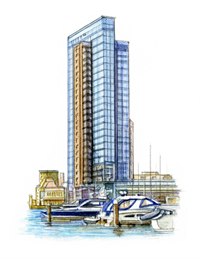 Located on the mouth of the River Itchen, Ocean Village was the site of Southampton's "Outer Dock" which opened in 1842. The area was redeveloped in 1986 and became the leisure marina it is today. After experiencing a period of stalled development with the late-2000s recession, Ocean Village is now undergoing another series of major, multimillion-pound redevelopment projects. Current recreational facilities include upmarket apartments, two cinemas, cafes, wine bars and restaurants.