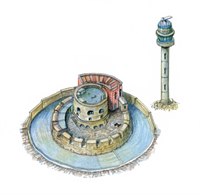 The castle (circa 1537), surrounded by a moat, was built with stone from Beaulieu Abbey, and formed part of Henry VIII’s Tudor defences of the South East from attack by marauding French forces in 1545. Initially it was garrisoned by only 20 men.

Calshot Spit, formed by the Eastward drift of shingle along the North Solent, projects about 900 yards into Southampton Water.