Hampshire, Southampton and the Isle of Wight have excellent scheduled local and regional bus services which integrate with rail, air and ferry services.

Quayconnect is a shuttle bus service between the ferry terminals on Town Quay and Southampton Central Station (south side) via the WestQuay shopping centre.

The service is FREE to Red Funnel ticket holders, passengers with through rail or National Express coach tickets to/from East Cowes or West Cowes and holders of Senior Citizen bus passes. For all other passengers, a flat fare of just £2 applies for a return journey which is payable on boarding. Period passes and Plusbus tickets are not accepted.

A revised timetable will be in place from Wednesday 25th March 2020 until further notice.
Download the Revised Quayconnect Timetable.pdf

Frequent buses operate between West Cowes and Newport (Service 1) from where there are connections across the Island. Service 1 connects with Red Jet Hi-Speed arrival and departures, stopping right outside the terminal in Fountain Yard.

There are regular services between East Cowes and Newport (Service 5) and Ryde (Service 4). The bus stop is directly outside Waitrose, a short distance from Red Funnel's East Cowes Terminal. Service 4 & 5 both stop outside Osborne House (5 minute journey). 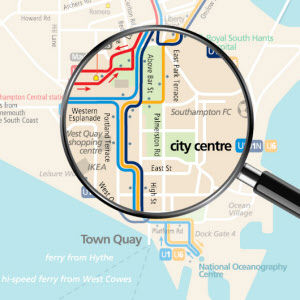 Xelabus offer local services around Bitterne and Shirley, along with buses between Eastleigh and Hedge End via Mansbridge.

PLUSBUS The City of Southampton is also a member of PLUSBUS, the integrated ticketing scheme. You can buy a PLUSBUS ticket with a single, day return or period return train ticket and receive unlimited bus travel within the city on all First, Bluestar, Stagecoach, and UniLink services.