Red Funnel’s Hi-Speed passenger catamaran, Red Jet 7 marks one-year of service in the Solent during which she has travelled over 84,000 nautical miles, completed 3,615 round trips and nearly half a million passenger journeys. 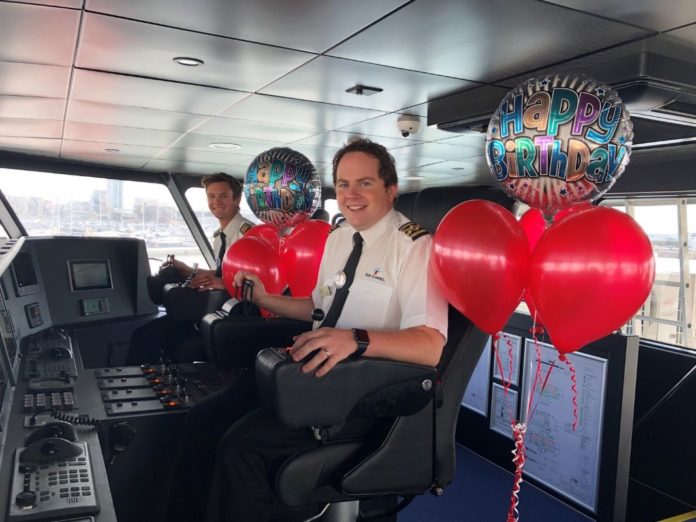 Red Jet 7 joined the Red Funnel fleet on July 17, 2018, and like her sister, Red Jet 6, was built on the Isle of Wight by Wight Shipyard Co. representing a £7m investment by Red Funnel.

Red Jet 7, which to date has spent almost 3,000 hours at sea, was officially launched in July last year with a prestigious naming ceremony when HRH The Duchess of Cornwall officially named the new ferry with the traditional formality of breaking a bottle of champagne on the bow.

Red Jet 7 is the greenest ferry within the Red Jet group; she utilises new technology to reduce her environmental footprint, and at four tons lighter than Red Jet 6, she has improved fuel consumption which further reduces emissions.

Commenting on the one-year anniversary of Red Jet 7, Red Funnel CEO, Fran Collins, said: “The launch of Red Jet 7 was another proud day in Red Funnel’s history. We take great pride in our commitment to supporting British shipbuilding and are particularly proud of the fact that she was built on the Island, for the Island, utilising the skills of more than 85 Island-based expert craftsmen.

“In her first 12 months of operation, Red Jet 7 has a earned reliability score of 99 per cent and a punctuality score of 93 per cent, meaning that 99 per cent of all our scheduled crossings went ahead as planned and 93 per cent of crossings departed and arrived on time, with the majority of the shortfall due to adverse weather conditions such as fog and strong winds. Overall, she’s had a very successful first year and we look forward to many more, especially as we now head into our summer season and concurrently mark another big anniversary – 50 years of hi-speed service, which we’re marking with The Red Funnel Fireworks at Cowes Week on the 16th of August. We can’t wait!”