Despite the 2019 Isle of Wight Festival coming to an end yesterday (Monday 17th June), festival spirits were not dampened onboard Red Funnel Ferries with a surprise performance from the English ska band Madness, well known for songs such as "Baggy Trousers" and "It Must Be Love". 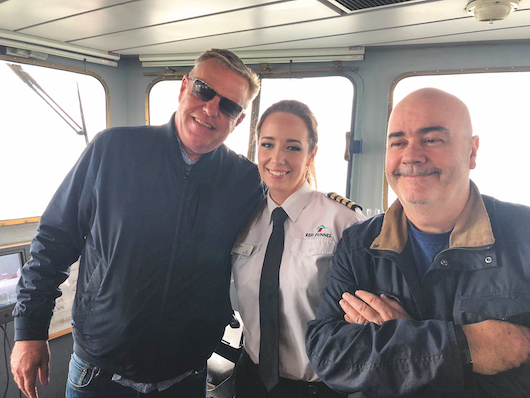 Crew onboard Red Funnel’s Red Falcon, who worked tirelessly over the four-day festival period taking thousands of festival goers to the Island, were treated to a surprise rendition of ‘Happy Birthday’ as lead singer, Suggs and the rest of the Madness group serenaded Red Funnel Ferries' Captain, Alice Duncan while they crossed the Solent from Southampton to perform on the main stage on Sunday 16th June.

Captain Alice Duncan, who has worked for Red Funnel for almost seven years and is a big fan of Madness, marked her 28th birthday during the Isle of Wight Festival. Unfortunately, Alice didn’t manage to see the 80s band perform but was instead surprised with a front row performance as Suggs and the rest of the band joined Alice on the ferry’s Bridge.

Commenting on the surprise, Red Funnel Captain, Alice Duncan said: “My dad and I are huge fans of Madness and I’m shocked and surprised that the band came up to join the crew on the Bridge to sing Happy Birthday to me. It was an amazing moment and it made up for not seeing them at this year’s festival. This will be birthday I won’t forget!”