10-11-2017 - Official Early Bird tickets for next year's Isle of Wight Festival are now on sale via Red Funnel – offering a discount of up to £64 per person – and the savings don't stop there; Red Funnel has today also launched a range of festival ferry travel offers from just £10 return. 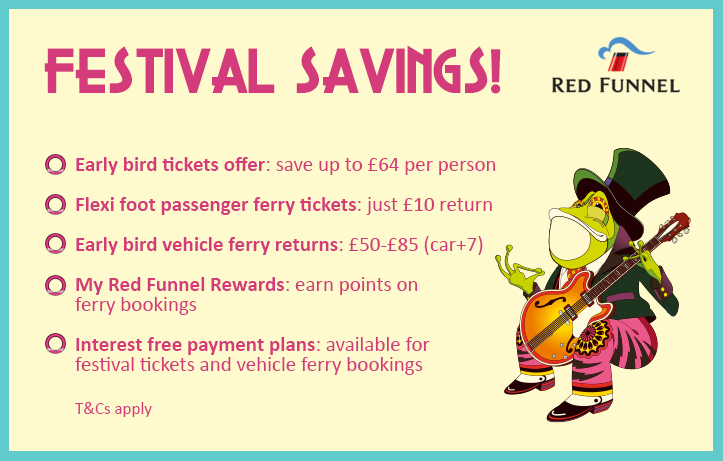 Red Funnel's ferry travel offers include a £10 foot passenger flexi ticket (£5 for children) valid for a return from Southampton to East / West Cowes when travelling between 21 and 25 June.

Special Early Bird car rates are also available for a limited time only, with fares between 19 and 27 June ranging from £50-£85 return for a car and up to seven passengers. The cheapest fares are available when travelling before 21 June and after 25 June, a great opportunity for festivalgoers to stay longer and explore more of the Island.

For those whose camping days are behind them, Red Funnel Holidays has a wide range of accommodation available on the Island including hotels, guest houses and B&Bs, holiday parks and self-catering cottages and apartments.

Red Funnel is also offering customers the option to spread the cost of festival tickets with a free five stage Payment Plan; 20% is payable at the time of purchase followed by a 20% payment at the end of January, February, March and April 2018. An interest free plan is also available for car bookings, with £25 payable upfront and the balance 30 days before departure.

2018 marks 50 years since the inaugural Isle of Wight Festival in 1968 and, having welcomed the likes of Jimi Hendrix and The Doors in the early years, the festival has continued to attract show-stopping headliners since its successful relaunch in 2002 including Foo Fighters, The Rolling Stones, Jay-Z, Coldplay and Fleetwood Mac.

A secure postage fee of £4.95 is applied to each Isle of Wight Festival ticket(s) order.